The original dial for Paul Morphy's watch (left), beside the PS-801-CH (right).

The inspiration for our watch is from a pocket watch that was given to American Chess Master Paul Morphy in 1859 by the New York Chess Club. It was presented at a Testimonial Dinner upon his return from Europe, where his dominant play inspired a hero's welcome back home in America. Paul Morphy was considered by many to be the greatest chess player of his era.

The original watch given to Paul Morphy was made by the American Watch Co, later known as Waltham Watch Co. Morphy visited the factory in Waltham, MA on May 30, 1859, and was given a tour. The original dial was designed by John Webb, Jr., head of Waltham's dial department.

Not much is known about what happened to the watch; today only the original dial survives. We had first seen the dial at the NAWCC Watch and Clock Museum in PA. The dial was so unique we knew it was another historic design we would want to use in an RGM. Instead of the usual Roman numerals on the dial, the hours are represented by various chess pieces, finely done in red and black enamel: the Black King standing at twelve, and the Red King at six, the Queens at one and eleven, Bishops at two and ten, Knights at three and nine, Castles at four and eight, and Pawns at five and seven.

The Pennsylvania series watches have a strong, bold but classic case style. With its large lugs and ribbed sides, the watch is architecture on the wrist. Each stainless steel case is made in the United States and finished by hand, the perfect complement to the beautiful movement inside. The "PS" stands for "Pennsylvania Series" and the "CH" stands for "Chess."

“Paul Morphy was perhaps the most accurate player who ever lived, he would beat anybody today in a set-match. He had complete sight of the board and seldom blundered even though he moved quite rapidly. I've played over hundreds of his games and am continually surprised and entertained by his ingenuity.” – Bobby Fischer

A keystone is a central wedge in an arch that locks all other pieces of an arch in place. It is the part of an arch that all other parts depend upon. Pennsylvania's popular nickname, "The Keystone State," refers to this necessary element. The idea for RGM's Keystone hands came from a set of hands Roland was given when he was in watchmaking school in Lancaster, PA. They were a thin set of gold hands with a Keystone on each hand. He found out from some old watchmakers that they were made by Keystone Watch Company, which was in Lancaster, PA, between 1886 and 1891. Never forgetting these beautiful hands, they eventually became the inspiration behind the Keystone hands he designed for RGM.

Creating an enamel watch dial is a high-risk art. Enameling is a technique in which colored powdered glass is applied to a metal plate. The surface is then heated to a temperature high enough to cause the powdered glass to melt and form a new surface. The Grand Feu technique ups the stakes. It involves meticulously coating a watch dial with successive layers of enamel. Once a layer is ready, the dial is heated at extremely high temperatures, ranging from 1472-1652°F (800-900°C). The repeated baking of each individual layer ensures a uniquely crisp aesthetic while permanently setting the enamel. Using high heat to create these beautiful dials also poses a risk. Each time it is re-fired, the danger of cracking, melting, or burning increases. The red and black chess figures are also baked into the surface. With great risk comes great reward: the appearance of a real glass enamel dial is unmistakable.

Behind the dial is our American 801 movement. Like many things that we do at RGM, the 801 is inspired by America's great watchmaking past. The bridges are reminiscent of the Keystone Howard Watch Company's "Edward Howard" model, their flagship watch and one of the high-grade watches of its time. The unique winding click is inspired by the Illinois Watch Company's "Illini" model and the deep polished winding wheels are finished like those of the Illinois "Bunn Special." Like the great Railroad watches from America's past, the 801 has a high grade finish that denotes the quality of its construction.

The watch is pictured in a polished stainless steel “Pennsylvania series” case. Like many of the components of the Caliber 801, the case is also made right here in Lancaster County, PA, USA. The keystone winding crown completes the Pennsylvania theme.

We are again bringing America’s great watchmaking past forward, this time immortalizing Chess in enamel. This truly unique piece will last for generations—like the dial that inspired it.

RGM's PS-801-CH wristwatch with a House of Staunton chessboard and chess pieces. 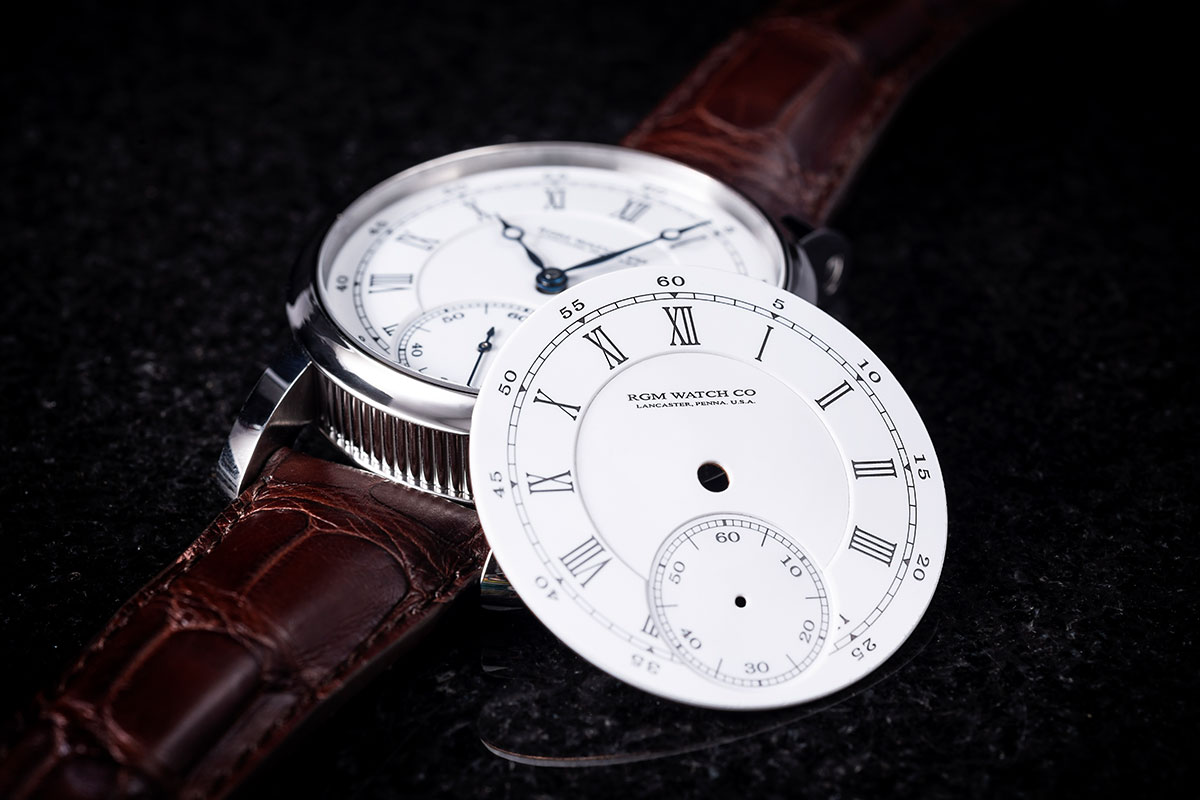 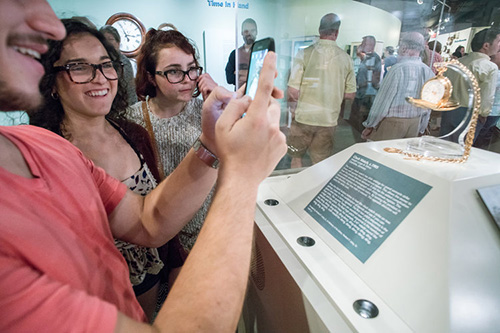