From the Collection: Six Brights a Breitling

On loan to the National Watch & Clock Museum are six circa 1999 Breitling watches: an Aerospace Minute Repeater, an Old Navitimer II, a Chronomat, a Premier, a Cosmonaute II, and a Chronoracer Rattrapante.

The watches are all chronographs. All are mechanical with the exception of the Aerospace, which combines a digital and analog display. The Navitimer and the Cosmonaute are much the same watch, the difference being that the Cosmonaute is geared to a 24-hour display. Both watches are the result of interaction with aviators. In the case of the Cosmonaute, Scott Carpenter not only suggested that Breitling design such a watch but took the results with him on his 1962 earth orbiting mission. It is also rumored that an Aerospace has been seen aboard the International Space Station. The Premier and the Rattrapante are smaller-diameter chronographs with more of an eye toward style, and the Chronomat is an automatic in the vein of the automatic Navitimer Chrono-Matic.

These watches exemplify Breitling’s contributions to the world of horology as it interacted with and supported the growth and development of world aviation.

Beginning in the Jura Mountains of Switzerland in 1884, Leon Breitling produced instruments for industry as well as chronograph pocket watches. His success in business led him to move to La Chaux-de-Fonds where he employed 60 people.

Just before the outbreak of World War I his son Gaston took over the company and began supplying pilots with the first wristwatch chronographs. In 1923, Breitling was awarded the patent for creating the independent push piece, which eliminated the need to use the winding crown for that function.

Willy Breitling took the reins in 1932, after his father Gaston Breitling passed away, and within 2 years introduced a watch with a second return-to-zero push piece. This innovation allowed for the measurement of successive short times that were totalized by the first push piece and gave the chronograph its modern form.

Aerospace - A minute repeater with a green-grey dial and bracelet

One of the unique things about the Aerospace is its dual analog and digital display. It is equipped with a minute repeater, chronograph, alarm, timer, second time zone, date, and day of week. Our model sports the hour numerals in italic, a change that occurred in 1998 and persisted until 2005, the 20th anniversary year.

The Aerospace debuted in 1985 and was originally classed as a Navitimer and was so displayed both on the dial and the case. The 7-jewel, quartz movement was based on ETA 988 calibre and the watch case was made of lightweight titanium. The digital display provides a second time zone, 12- or 24-hour time, day, date, and alarm. According to the advertisements of the period, all chronograph functions were controlled by the crown with “no buttons to push” (ironic because the button was Breitling’s claim to fame due to the 1923 patent of the first push piece). This watch originally sold for $850 to $980.

Breitling and the Aircraft Owners and Pilots Association (AOPA) collaborated to engineer a watch to AOPA’s standards. The result was the Navitimer manufactured for pilots in early 1950s, with the distinctive AOPA winged logo on the dial.

The AOPA Navitimer brochure points out that the watch will “record hours, minutes, and seconds of elapsed time.” Its “time out feature permits recording time continuously or at intervals.” The Navitimer “has a 12 hour recorder and a 30 minute register” and “buttons large enough to push with a gloved hand.”

During Breitling’s Centennial year, and after a hiatus of 6 years, a new Chronomat was debuted. First produced in 1941 as a wrist chronograph equipped with a circular slide rule, the Chronomat was marketed in numerous forms up until 1978.

Breitling had the honor of bringing out the first automatic chronograph in March1969. It was dubbed the Navitimer Chrono-Matic and had a modular movement as opposed to the Zenith El Primero integrated automatic movement released a few weeks later. In the ‘70s a quartz non-chronograph version was produced.

In 1984 the watch was redesigned with pilots in mind. In fact, Breitling sought advice and comments from the elite Italian air force aerobatic team, the Pattuglia Acrobatica Nazionale Frecce Tricolori. Based on their suggestions, the pushers and crown were made easier for pilots wearing gloves to access. Another change replaced the circular slide rule with a timing bezel and four rider tabs also easy to grasp. The new Chronomat made use of the Valjoux 7750 and became Breitling’s biggest selling watch.

Premier - with a silver dial, aviation numerals and a steel bracelet

The Premier watch was first produced in the 1930s and was available in stainless steel and gold. They were manufactured until the 1960s and then not seen again until 1996 when a run of 5,000 were produced until 1999. Originally available as a two-register chronograph, the Premier eventually added a third register. The two-register (subdial) Premier was common into the early 1950s. The Museum’s 1999 version has three subdials: a 60-second subdial and a 10th of a second and 3-hour totalizer.

The Premier used chronograph calibers from Venus including the 150, 152, 175, and 178. The 1990s models used Breitling’s Caliber B40, which is based on the ETA 2892. On earlier models the two pushers are a rounded flat rectangle while newer models were fitted with the standard rounded posts. The overall impression of the Premier watch is one of confidant elegance with a touch of functional competence.

In 1959 Lt Cmdr Scott Carpenter was selected as an astronaut for the NASA Mercury program. Since he had worn a Navitimer during his time as a pilot in the Korean War, he asked if Breitling would be interested in making a 24-hour version of the watch. Breitling agreed and introduced the watch in 1961 with the same Venus caliber 178 movement used in the Navitimer, but with a 24-hour gearing. The watch orbited the earth with Carpenter. Unfortunately the watch was submerged in the water on splash down, returned to the Breitling company, and hasn’t been seen since!

In 1967 there were some Cosmonaute watches that were powered with the Valjoux 7736 movement. In the 1980s, most Cosmonautes made use of the Lémania 1873/1877. Ironically this movement was used in the Omega Speedster, the watch that NASA chose over the Cosmonaute for use in the space program. In the 1990s, the Lémania 1873/1877 movement incorporated the “Delrin” brake, a polymer instead of a metal brake to stop and release the chronograph. There was some consternation over its use and Breitling was known to replace it upon request. In 1996 Breitling came out with a Scott Carpenter model and 1,000 versions were made. By 1999 the Cosmonaute was COSC-certified. A few years later, in 2001, the Lémania 1873/1877 movement was replaced with a new automatic movement based on the ETA 2892A2.

The Chronoracer Rattrapante - with a black dial, aviation numerals, and steel bracelet

The Chronoracer Rattrapante is another Breitling hybrid of sorts. It is an electromechanical quartz movement based on the F. Piguet MecaQuartz 1271. This means that the watch is powered by a battery that interacts with dual quartz crystals. The quartz crystals oscillate, creating pulses that the digital circuits can then convert to the proper time intervals for display. The chronograph component of the watch is fully mechanical. Breitling’s movement was known as the calibre 69, which was also used in a run of the Chrono Avenger Sixty-Nine.

The Chronoracer Rattrapante is equipped with an additional second hand (a second second hand?). This allows both second hands to begin moving when the button is pushed. While they are moving, pushing a second button will stop one of the second hands while the other keeps tracking time. The time of the stopped hand then can be noted. Pushing the second button again causes the stopped hand to jump into synchronization with the first, still moving, hand. In French the word Rattrapante means “catches up,” an apt term since the lap hand catches up with the continuously moving second hand.

While many watch companies dedicated their time to producing watches for luxury purposes, Breitling, almost from the beginning, has focused on manufacturing timepieces that we might say, serve a “higher” purpose. Chronographs have been an aviation necessity since pilots first started wearing watches. In fact, it was air pilots along with their compatriot soldiers on the ground, who first overcame the perception of watches as women’s jewelry. The chronograph in its evolving forms has been the imperative tool of every aircraft cockpit inhabitant, and Breitling has done much to contribute to the growth and development of that tool. 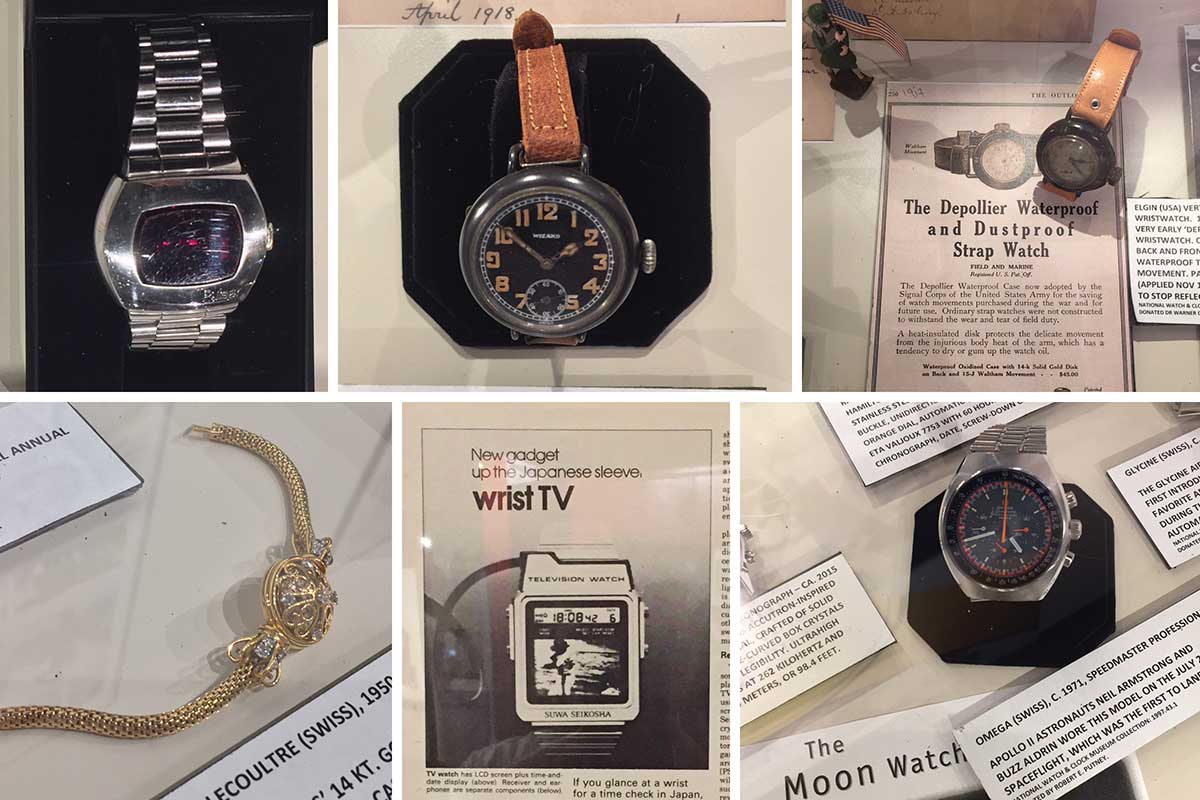