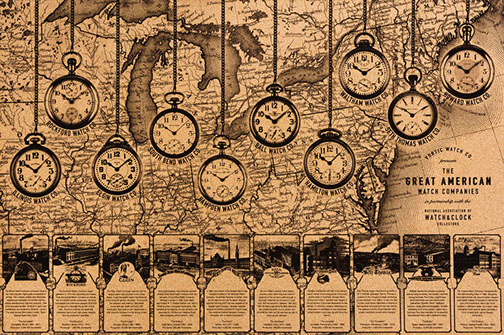 Image of the Map of the Great American Watch Companies. Photo courtesy of Vortic Watch Company.

Have you heard of Mary Babcock? What about W. C. Shelton or Professor Louis Lehmann? They are some of the delightful characters from the history of American watchmaking I learned about while working on Vortic’s Map of the Great American Watch Companies. The map, now available for purchase on vorticwatches.com, includes a brief history, production numbers, and a couple of fun facts about each of the ten most influential American Watch Companies. My contribution was researching the fun facts.

The first step was to establish what constitutes a “fun fact.” I decided that the facts should be easily explained in two sentences and provide insight into the day-to-day functions of the companies. With that decision made, I began researching the histories of the ten companies to look for information that may not be widely known or that simply caught my interest. I used various resources, including the Bulletin, books in the Lending Library, newspapers.com, and, of course, Google. Some companies were more straightforward than others (I apologize to the coworkers who heard me yelling in my office, “There is literally nothing interesting about [company name redacted]!”), and some yielded captivating information that was either irrelevant (did you know one of the early executives at Rockford Watch Company was sued for breach of contract for allegedly calling off a marriage engagement?) or that just couldn’t be distilled enough to fit into two sentences. (Look up Professor Louis Lehmann and the Illinois Watch Company Band sometime.)

It became clear as I worked that the history of industrial watchmaking in the United States provides a fascinating insight into the history of American manufacturing. At the heart of all of the watch companies I was researching were the individuals who worked there; their stories provided the best “fun facts.” The history of watchmaking is made compelling by the 21 Dueber-Hampden Watch Company employees who were invited to Russia to teach watchmaking, the Rockford Watch Company workers who caused a stampede after lightning struck the factory, or the thousands of factory employees who organized choruses, bands, theatrical troupes, and sports teams with their fellow staff members. As for Mary Babcock and W. C. Shelton, you’ll have to take a look at the map to learn their stories.

Proceeds from the sale of the map will benefit the National Association of Watch & Clock Collectors.