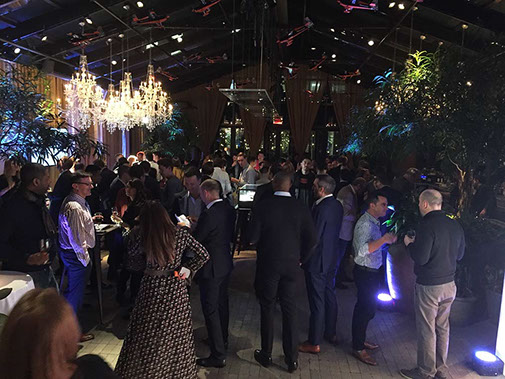 On March 1, 2018, at the NoMo SoHo Kitchen in New York City, Hamilton Watch Co. and HODINKEE commemorated the first American airmail service from Washington, D.C. to New York. The National Watch & Clock Museum, the official historian of Hamilton, also attended the event and contributed to the evening’s mise-en-scène with Hamilton timepieces and artifacts from the Museum’s collection in Columbia, PA.

In 1918 the Hamilton Watch Co. was a fledgling, American-owned company, already respected for their railroad-grade watches. Because they were chosen to be the official timekeepers of the historic flight, Hamilton Secretary Frank C. Beckwit was present at the opening ceremony. Also present were President Woodrow Wilson, Postmaster General Albert S. Burleson, and Assistant Secretary of the Navy Franklin D. Roosevelt.1 All U.S. Air Mail pilots were outfitted with Hamilton watches. The pilot of the initial flight, George L. Boyle, was personally given his at the ceremony by Beckwit. 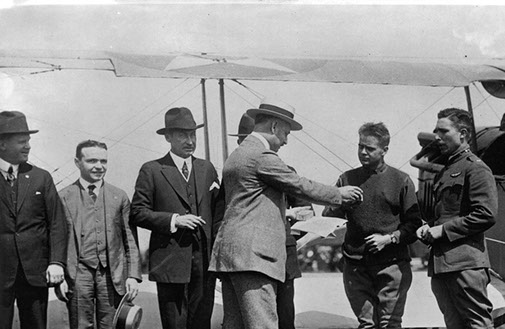 Only invitees who registered through HODINKEE could attend the celebration; the time and location of the event were not revealed publicly. The usual accoutrements of an evening celebration at a Soho hotel were present. What made this event truly unique were the more than dozen models from Hamilton’s Khaki Aviation Collection, a watchmaker and his bench with various Hamilton movements, and three aviation-themed showcases with pieces from the National Watch & Clock Museum, including the Hamilton pocket watch Admiral Byrd used on his first expedition to Antarctica. 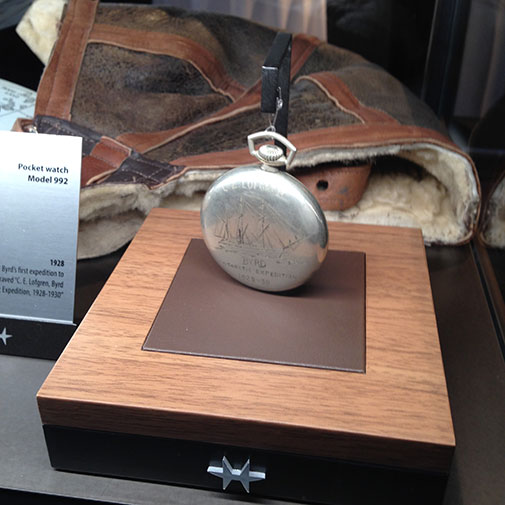 Hamilton pocket watch which was used during Admiral Byrd's first expedition to Antarctica in 1928. Photo by Keith Lehman. 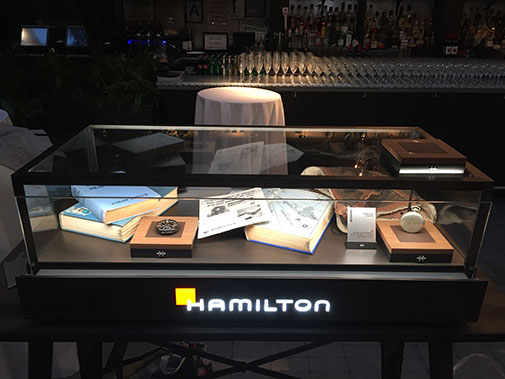 One of the best moments of the night happened just before the event began, when Museum Director Noel Poirier presented to Hamilton CEO Sylvain Dolla an actual Hamilton 985 wristwatch movement (from the Museum's collection) that a U.S. airmail serviceman would have received in 1918. 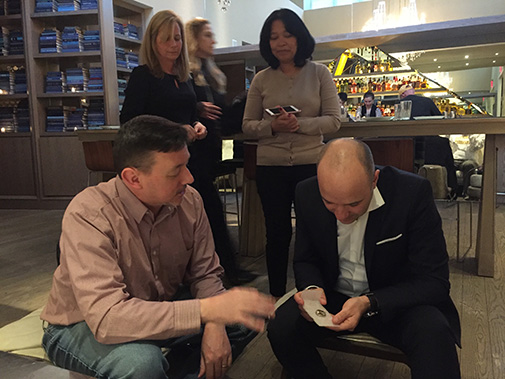 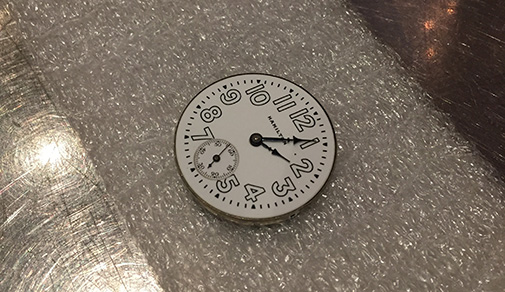 Hamilton 985 wristwatch movement that a U.S. airmail serviceman would have worn in flight. 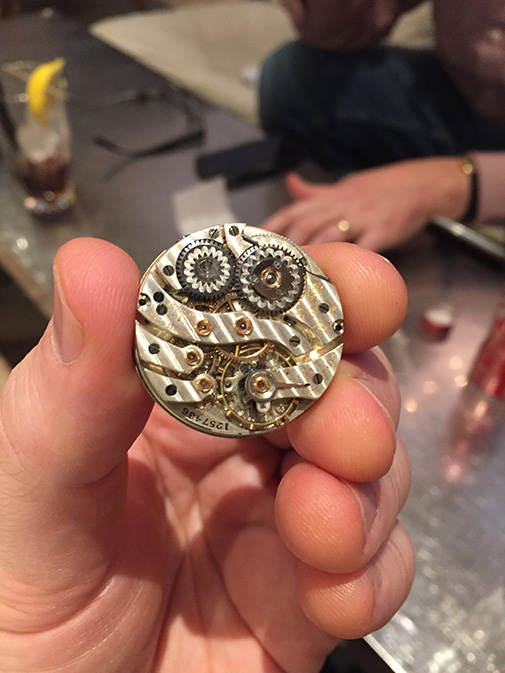 View of the Hamilton 985 movement. Photo by Keith Lehman.

As a proud Lancaster County native, this was an unforgettable night for me. The importance of the Hamilton Watch Co.’s contribution to American culture is undeniable. Their world-renowned railroad and aviation timepieces, innovative and fashionable wristwatches (many of which graced the silver screen), and war-winning contributions during World War II established Hamilton as a truly history-defining brand. The closing of the factory in the city of Lancaster, PA, in 1969 and the 1974 sale of the company to SSIH (which became Swatch Group in 1998) became part of the new dialog of the retreating American industry. I know many men and women who worked at Hamilton, and even today its loss is still palpable in Lancaster. But during a conversation with Sylvain Dolla about the impressive growth and world recognition the brand enjoys, he said, “We are proud of Hamilton.” Without hesitation I said, “We are, too!” It was then that I realized that my hometown Hamilton is in competent and global hands. 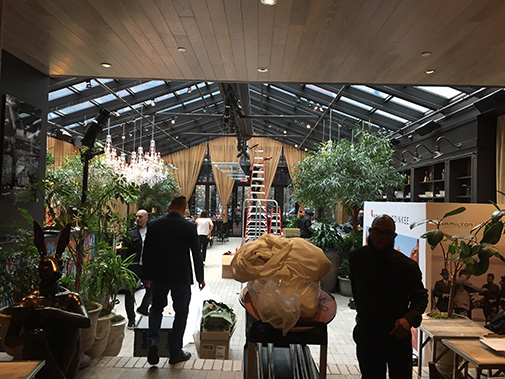 Hamilton and hotel staff frantically setting up for the event in the Nomo Soho Kitchen. Photo by Keith Lehman. 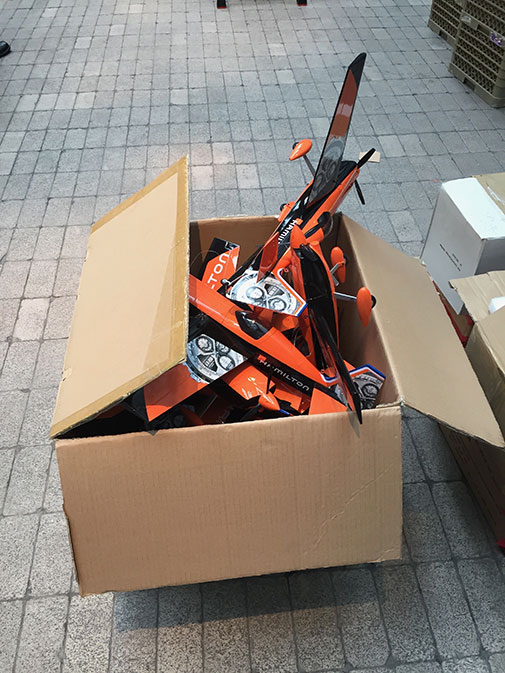 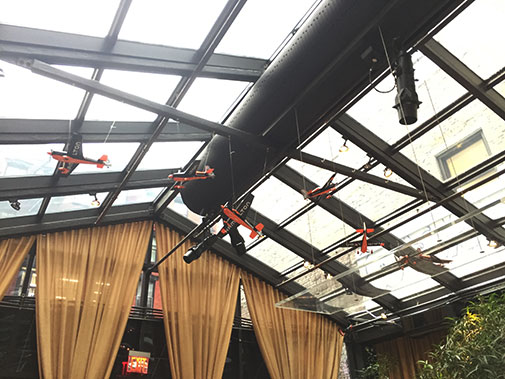 Circa 1943 Hamilton Watch Co. navigation watch in carrying case from the collection of the National Watch & Clock Museum. Photo by Keith Lehman. 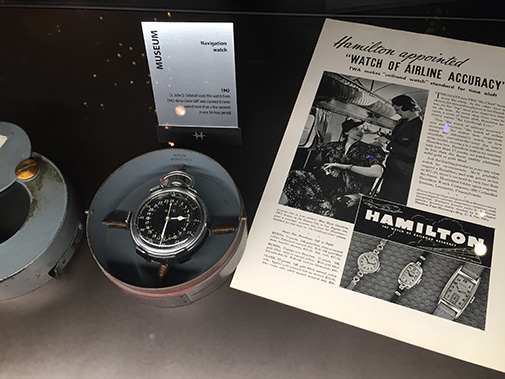 Circa 1940 Hamilton Watch Co. aircraft clock from the collection of the National Watch & Clock Museum. Photo by Noel Poirier. 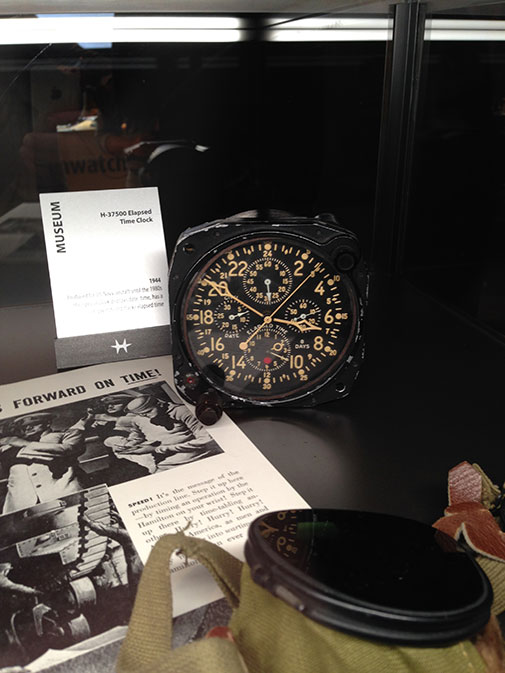 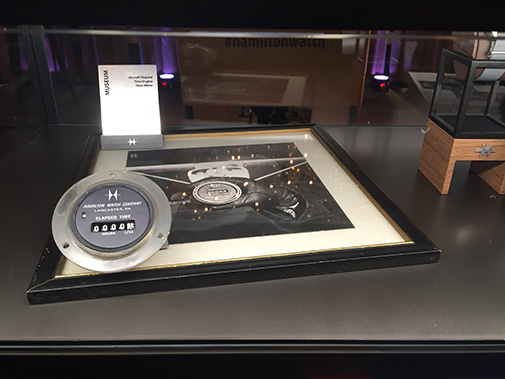 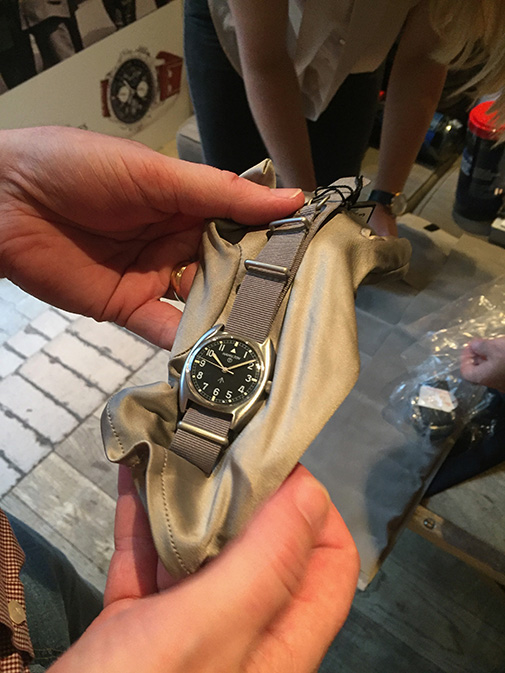 Circa 1973 Hamilton Watch Co. W10 British Army Watch from the collection of the Hamilton Museum, Switzerland. Photo by Keith Lehman. 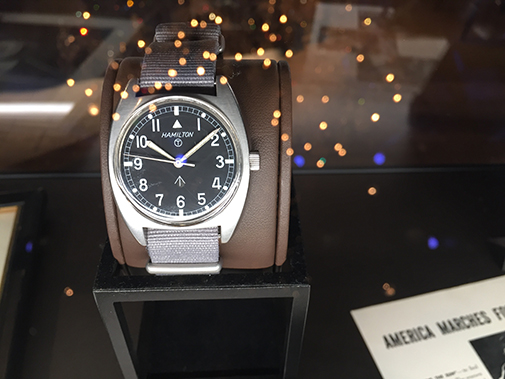 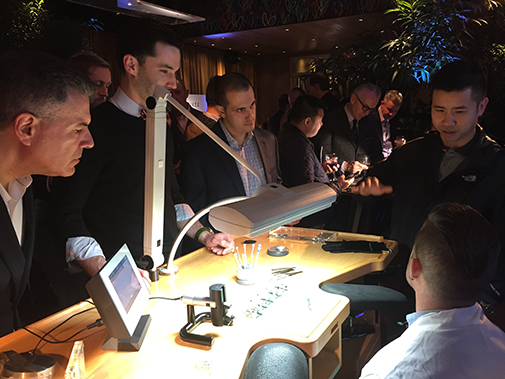 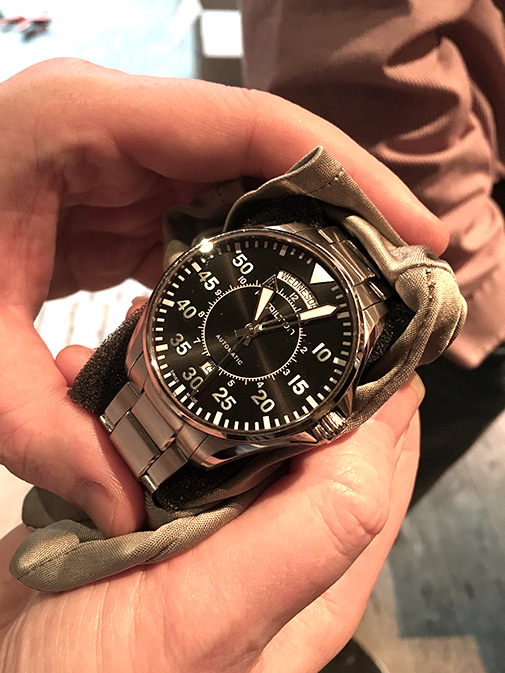 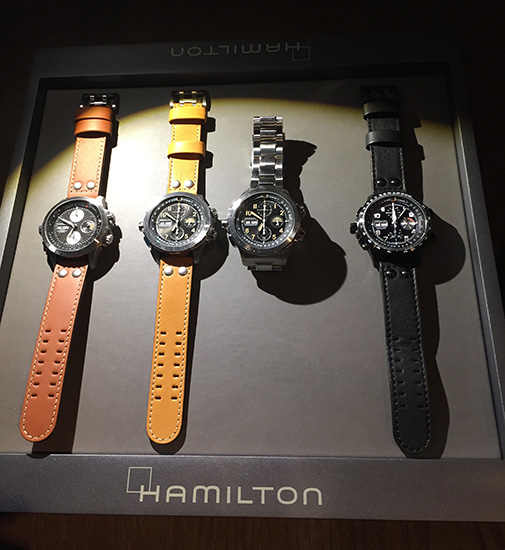 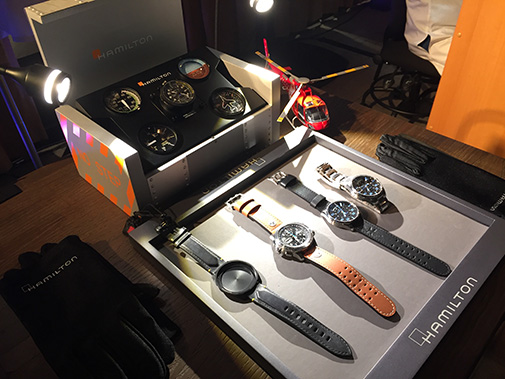 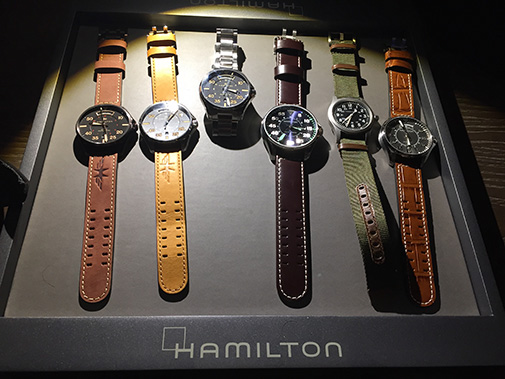 Hamilton watches from the Aviation collection. Photo by Keith Lehman. 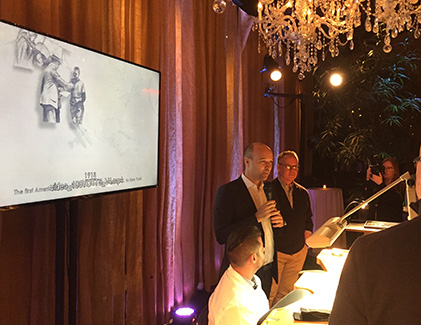 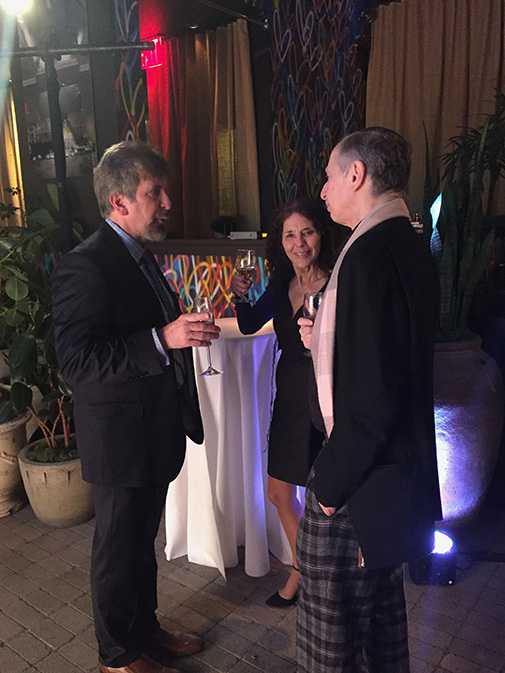 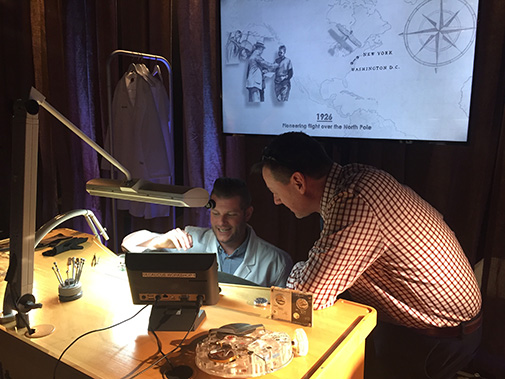